In Memory of Nancy Hall 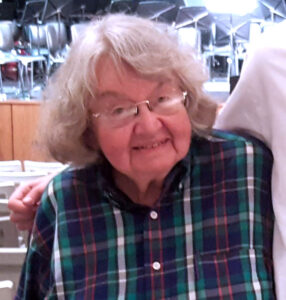 Nancy Schafer Hall, PhD, 79, of Harrington, DE, and formerly Annapolis, MD, passed away on Sunday, February 6th, 2022 after a brief, but valiant fight with ovarian cancer.

She was born to John Daniel Schafer II and Louise Stayton Schafer of Dover, DE on March 28th, 1942. She grew up in Wilmington, DE and was an enthusiastic Girl Scout. She fondly remembered her times as both a camper and a counselor at Camp Misty Mount forging friendships that would last her whole life. Nancy attended Mount Pleasant High School and was a standout student. In 1960, she was chosen to be the Delaware representative in “The Betty Crocker Search for the All-American Homemaker of Tomorrow” and got to meet then Vice-President, Richard Nixon. She graduated that same year and enrolled in the University of Delaware where she met Jay S Hall.
Nancy received her Bachelor’s degree and later earned her Master’s degree in Mathematics from the University of Delaware. She became a professor of mathematics at her alma mater and would go on to teach math and statistics at all levels for more than 50 years before finally retiring in 2019.

Nancy and Jay Hall were married in Wilmington, DE on Sept. 12th, 1964, and enjoyed going to concerts, playing golf and watching sports. The two relocated to Annapolis, MD and later Cape St. Claire, where they welcomed the birth of their daughter, Rebecca in 1969. They would have two more children, sons Eric and Kenneth.

Nancy loved being a part of the community and, with 2 other couples, opened a local hobby and craft store called the Artist’s Flat. The store grew into a community hub with a post office, school supplies, toys, greeting cards and plenty of candy. They continued to be actively involved in the store management until Jay’s passing in 1991.

Nancy volunteered at the local schools and tutored many children in both math and life skills. She also served as the Chief Judge for Anne Arundel County Election District 5, Precinct 2 from 1992 – 2006. While she appreciated the democratic process, what she really loved was getting to see the community and help others.

A lifelong scholar, Nancy never stopped learning. She travelled the world visiting Thailand, France, England, Germany and more. Returning to graduate school at the University of Maryland, College Park, to study history of science, she received another Master’s degree and completed her Ph.D. in 2002. Her dissertation was on the statistician R. A. Fisher’s discovery of randomized experimental design. Her research involved trips to archives in England and Australia, numerous presentations at professional meetings in the U.S., Canada, and France, and publications in professional journals. She even survived a shipwreck off the coast of the Galapagos Islands while following Charles Darwin’s path through the islands. She and the rest of the passengers and crew spent 13 harrowing hours adrift before being rescued by a Frenchman on a sailboat. After graduating, she continued her teaching of mathematics as well as research in the history of statistics, serving as a Research Associate to her dissertation advisor, Dr. Lindley Darden. In 2010, she published “Ronald Fisher and Gertrude Cox: Two Statistical Pioneers Sometimes Cooperate and Sometimes Collide” in The American Statistician.

After more than 30 years on Breezeway Drive, in 2007 she moved to Harrington, DE where she met her friend and partner Pat Lewis. The two shared more than a decade of fun adventures together including numerous trips transporting animals from farms to pet stores up and down the eastern seaboard, plenty of concerts, yard sales and more than a few nights at the Harrington Casino.
Nancy loved playing and being surrounded by music. She was an accomplished piano and bass player performing with the Dover Symphony Orchestra for 3 seasons. She also looked forward to attending the Augusta Music and Arts Festival each summer for more than 20 years. She became a regular congregant at the Bethany Church of the Brethren where she found great friendship, solace, and another opportunity to play music.

Nancy treasured the yearly trips to Rehoboth Beach, DE each summer to spend time with extended family and numerous friends. Her love of Rehoboth began as a young girl when she visited her own grandparents there on Maryland avenue. It continued a family tradition that will live on for many years to come.

She is survived by her brother John D Schafer III of Key West, FL, her three children Rebecca, Eric and wife Carrie Hall; Ken and wife Moriah Hall; and four grandchildren, Ben, Abby, Kayla and Jeremy Hall. She was preceded in death by her husband, Jay S Hall.

The family has chosen to have a small gathering at a later date to honor the woman who meant so much to them. In lieu of flowers, the family requests those who wish to express sympathy and celebrate her love of music to consider making a donation to the Junior Appalachian Musicians in Nancy’s name.

The family would also ask that you take a moment in the coming days or weeks to reach out and help someone… maybe a friend, or a relative, or neighbor, or even a stranger and think of Nancy. As she would often tell her kids, “Be a help.” It would mean the world to her and the family.