In Memory of Albert 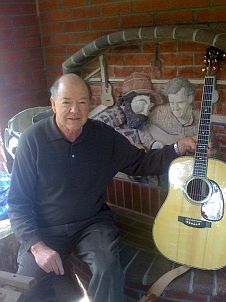 Albert Halluin was a rare genius – a truly brilliant man. An attorney by trade, he wrote the patents for much of the original stem cell research. And, like other high level professionals, he appreciated traditional music and was a guitar aficionado. After reading the book, Clapton’s Guitar- Watching Wayne Henderson Build the Perfect Instrument, his interest led him to Wayne Henderson.

Folks who know Wayne know that it’s helpful to have a “hook” to shortcut the 10 – 20 year waiting list to get one of his instruments. Albert had a good one. He did a bit of research and discovered that someone (other than Wayne) had trademarked “Henderson Guitars.” With an enlisted private eye, he determined that it was a scam with an address leading to an abandoned building in Wyoming. He eventually was able to reach the trademark “owner,” and with the backup of his law firm (and a little cash), he was able to persuade him to relinquish the name which he then promptly registered for Wayne.

Albert travelled with Wayne and I to see Doc Watson in Bristol in 2008. He was truly interested in JAM and the work we were doing to preserve the music and get it in the hands of children. We were saddened to hear of his death in his private plane (he was an avid pilot, as well) and we were quite touched to learn that he had bequeathed his Henderson guitar and a portion of his estate to JAM.

Albert, we salute you!