In Memory of Mark 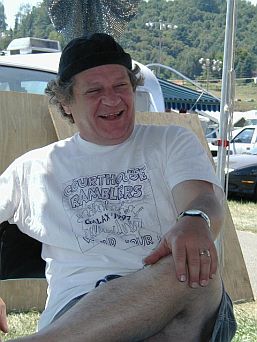 Mark was a much sought-after bass player, campsite host (including Number One maker of espresso and hot dog and breakfast chef) and all-around “life of the party” at fiddlers conventions and music gatherings throughout the New River Valley and far beyond.

Although his day job was “architectural draftsman and project manager of Rose Design,” creating many unique and fine homes and several commercial buildings, his primary passion was music.

Old-time music headed the list but Mark was a “man of many bands”: the first was the long-running “good-time band”, The Courthouse Ramblers, where he started with washtub bass, then took up acoustic bass. He played with other notable groups such as Hard Cider, The Skyliners, The Cabin Creek Boys, Acoustic Heritage, The Green Bottle Dawgs and many other pickup bands looking for a slot in the winners’ circle at local fiddlers’ conventions. A serious musician, he also played bass with small jazz and swing ensembles: the Yazoo Sisters, featuring his wife Len, and the HyTone Hepcats.

Mark touched many people with his compassion. He served as the bass teacher in the first year of the JAM program in Alleghany County, NC. I was the school counselor at the time and had a 12-year old student who was potentially suicidal. It was near the end of the school year when I asked the young man who he could call if he started to spiral into depression over the summer. He named Mark.

Mark left us from The Black Pot Festival in Louisiana where he was jamming in the campground with friends, old and new.

His wife, Len, asked that donations in his memory be made to JAM. Thanks, Len, and we miss you, Mark!